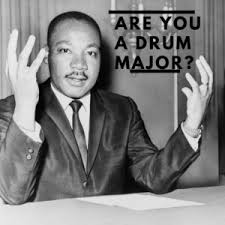 It’s a beautiful paradox that what we really need to open our minds is to use points of tension and conflict to see beyond our own often limited belief systems and ideally envision a new possibility.

This may have been the lofty, spiritual goal of the marketing department at Fiat Chrysler when they created this 2018 Superbowl ad,  but I seriously doubt it.  My guess is that they were looking to demonstrate social responsibility and to promote the Ram brand. The 1:07 minute ad features a voice over of Martin Luther King’s “Drum Major Instinct” speech, which MLK delivered precisely 50 years from the day the ad was aired.

As perhaps intended, the ad is very controversial. Advocates say that it is an ideal illustration of the Ram Nation Volunteers, a group that helps with blood drives, national disasters, and community service initiatives, according to a story in the Detroit News.  It was also approved by Intellectual Properties Management (IPM), an Atlanta-based firm controlled by King family members that handles licensing for the estate  “We found that the overall message of the ad embodied Dr. King’s philosophy that true greatness is achieved by serving others,” said Eric Tidwell, an attorney for IPM.

Perhaps the most poignant criticism of the ad are MLK’s actual words.  The remainder of the 1968 “Drum Major Instinct” speech includes MLK literally condemning the “the exploitation of the drum major instinct by advertisers, particularly car advertisers,”  and he describes dvertisers as “gentlemen of massive verbal persuasion.”

“And they have a way of saying things to you that kind of gets you into buying. In order to be a man of distinction, you must drink this whiskey. In order to make your neighbors envious, you must drive this type of car,” a transcript of the speech reads. “And you know, before you know it, you’re just buying that stuff.”

If everyone has an important piece of the truth, then what is the take away from this highly visible clash of values and world views? What would MLK say now?