I interviewed Tom Hayden in March of 2015 when he returned to his home state of Michigan and his alma mater, The University of Michigan in Ann Arbor, to celebrate the 50th Anniversary of the First Teach-In To End The Vietnam War. Hayden died Sunday at the age of 76.

“In the ‘60s, there was a common reaction to local abuses,” says Tom Hayden, a founder of the SDS and principal author of their political manifesto, the Port Huron Statement. “There was an outbreak of sit-ins at lunch counters that escalated from one town to multiple towns to a point where (in about three months) as many as 70,000 people had been arrested,” says Hayden. “It really didn’t have that much organization or money behind it. The traditional organizations got in line and helped along, but it was all young people who basically were acting as if they’d had enough, and were willing to stand up at some risk,” he says.

Hayden cautions against seeing one generation through the mindset of another. He believes young people today are very engaged and fearless. “For example, they are definitely leading the fight against the extreme effects of climate change,” says Hayden. “It’s their future that is being destroyed by the negligence of those who came before. So if it’s an issue that affects them very personally, you’ll see them in action.”

In similar ways, the widespread street protests and political action against police shootings of unarmed young black men are getting more reaction from young people, according to Hayden. “You’ve got a new generation of young people who are quite fearless in the face of violence, the hazard of violence, and the danger of violence,” says Hayden.

“The racial divide is still there. That’s quite unfortunate and also quite revealing. We have to remember that despite all the emphasis on nothing but the facts, people see through their own racial or social experience. They see reality differently. And that’s a different kind of racism. I wouldn’t even condemn it as racism; I would say it’s a racial lens. It’s an unconscious bias that’s built in. And now that it’s out, it’s worth talking about and finding constructive ways to engage.”

Hayden and other former SDS founders and Teach-In organizers gathered on the Ann Arbor campus in late March of 2015 to commemorate the 50-year anniversary of the first Teach-In. Held in Ann Arbor on March 24, 1965, the first Teach-In was a critical step in the formation of the ant-war movement. Thousands filled Angell Hall in 1965 to learn about the far-away country of Vietnam from professors, as well as those who lived and worked in Vietnam. 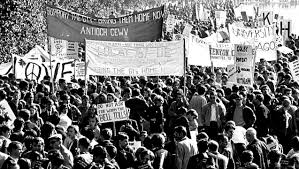 “As professors, we had to do something more than walk in circles. We had to do more politically,” said Frithjof Bergmann, a Michigan philosophy professor who led a torch light protest on the library stairs at the first Teach-In. “It became obvious that night that one could make a difference—in one night.”