“Our individual minds, though distinct and uniquely ours, may also join with others in a kind of mental symphony that now and then becomes audible against a prevailing background of static,” says Richard Samson, director of the EraNova Institute, whose mission is empowering human development.

Using random number generators, scientists from Princeton’s Global Consciousness Project (GPC) have documented this ‘mental symphony’ and discovered that when world events, such as the Pope’s address to the US Congress in September, engage millions of people at once, structure emerges out of randomness.

“Something is going on, and the most likely conclusion is that there is an interconnection of consciousness at deeply hidden levels between people and among people across the globe,” says Roger Nelson, GPC’s director.

Nelson and his team reached event number 500 last week and it posed a special challenge: two fortuitous and significant global events were happening at the same time, which made documenting their impact especially challenging. “One is the culmination of the long and difficult negotiations on Climate Change, and the other is a huge collaboration of many groups organizing mass meditations for peace and a brighter future,” says Nelson.

“Our methodology relies on precise timing and statistical leverage, and we have succeeded in making a persuasive general case, but interpretations of single events remains out of our reach. Nevertheless, the results for Dec 12 2015 are very interesting,” says Nelson. Here is a chart of his results:

The evidence again suggests an evolving noosphere, the unified field of consciousness described by sages in all cultures.

Savvy citizens and media professionals are actively harnessing the possibilities and potential of the noosphere. Advances in technology and communication networks allow access to this field of mind, and the opportunity to contribute to it.

When Neda Agha-Soltan was shot to death on June 20, 2009 during street protests in Teheran, bystanders’ video of her last breaths bypassed government censors and soon headlined international news. The speed, reach, and frequency of viral communication networks made Nada’s death one of the most widely witnessed in human history.

One of the first sages to recognize the existence of this thought energy that envelops the planet is the Jesuit philosopher, priest, and paleontologist Pierre Teilhard de Chardin, who coined the word ‘noosphere’ in the 1920s.

Teilhard believed the noosphere is the soul of the earth, which “represents the total pattern of thinking organisms and their activity, including the patterns of their interrelations.”

Teilhard was a noncombatant stretcher-bearer during World War I, and what he saw and felt on the battlefield pushed him to see more deeply into the essence of reality. In the trenches, he discovered an “underlying stream of clarity, energy, and freedom and witnessed the unity of all souls.”

Teilhard believed “war and peace existed in the minds of men.” He understood the power of human thought and the ability for one person to change the world. In Human Phenomenon, he wrote “By virtue of the world’s fundamental unity, once a phenomenon has been clearly observed, even only at a single point, its value and roots are simultaneously everywhere.”

Although much of Teilhard’s writing is deeply philosophical, his life’s work and training were eminently practical and scientific. He was on the team that uncovered the fossils of Peking Man, the first known Homo erectus and a vital missing link between apes and humans, and became one of the leading scientists of his time. He believed an “evolutionary force brought constant change to living things,” and that everything evolved toward a greater complexity and spiritual unity–an Omega Point. He spent his life trying to convince others of this truth.

Teilhard identified the noosphere almost 100 years ago when radio technologies were in their infancy. Today’s technologies continue to enable the simultaneous awareness characteristic of the noosphere. Cairo’s Nevine Zaki took a picture of Christians protecting Muslims as they knelt for prayer during the height of the Arab Spring. 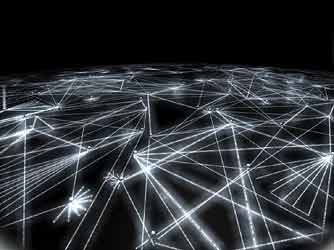 Zaki’s message of hope was instantly viewed by hundreds of thousands of people around the world, and as is the life of most popular news memes, it was soon widely redistributed by mass circulation outlets including ABC and NBC News and the magazine Good.is.

Her picture was published on OpEdNews.com and the caption read, “To those who suggest that the Egyptian revolution is a threat, that radical Muslims will take over and endanger Israel, here is an image that contradicts that negative energy.”

The power and potential of the noosphere is especially reflected in the realm of media. News stories mirror human lives: they are how individuals come to know themselves, each other, and the world. The conscious and responsible sharing of news and information supports the creation of a newsphere, a global web of connections supported by networked technologies.

A good example is the work of progressive American journalist, Amy Goodman, the host of the popular Democracy Now television and radio program. After hearing the Pope’s address to the US Congress in September of 2015, Goodman soon reported on the life and work of the relatively obscure activist Dorothy Day. Until Pope Francis identified Day during his U.S. Address, Day’s work resided in history books. Goodman used the newsphere to extend and amplify the Pope’s message.

Ethical and responsible news creation, distribution, and consumption is more important than ever. Jose Arguelles warns against the necessity to “numb out” in a newsphere polluted by debate-style stories, propagandizing, and a host of data-driven manipulation strategies. The creation of a virtual reality by moneyed special interests is referred to as “astroturfing,” and Arguelles calls this manipulation an “artificial noosphere.”

Participating in the noosphere first requires awareness. “We have reached the phase in cultural evolution where we must assume full responsibility for our power. And the noosphere concept suggests a philosophy for such a necessary balance,” writes Mikhail S. Gorbachev in the forward to the Biosphere and Noosphere Reader.

Participating in the noosphere also requires engagement. As ever-more sophisticated communication technologies affirm, what is actually growing and changing is the quality and quantity of connections between people.

Christine M. Tracy, Ph.D ia a Journalist, media analyst, and author of The Newsphere, The Mystic as Everyman, and Evolution and A Technology of Grace.