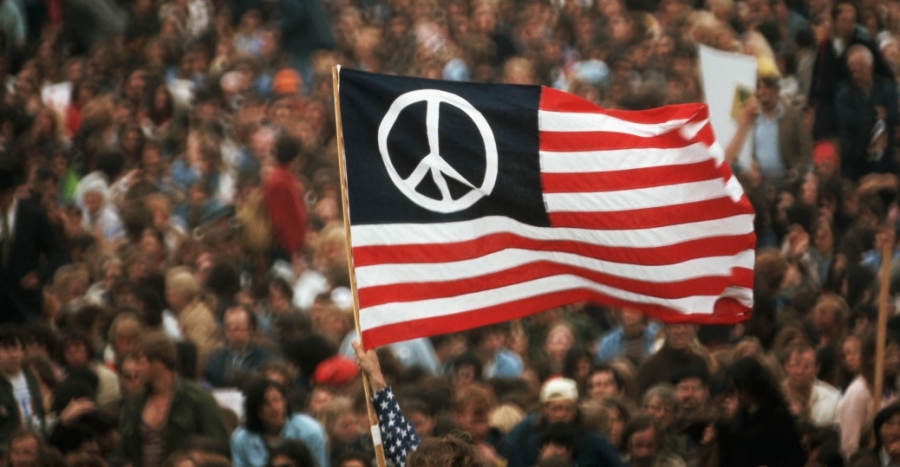 “We had the fervent belief that we could change America. We believed in our country, but we believed our country was making some mistakes,” says Roger Manela, an early member of the Students for a Democratic Society (SDS), a ‘60s political action group founded in Ann Arbor, Michigan.

Manela handcuffed himself to a post at a Detroit Draft Board and began handing out SDS leaflets to protest the Vietnam War. “Join us,” Manela urged the other young men standing in their underwear. “This is an imperialist war,” shouted Manela. “Think about what you believe in,” he implored. “If you are against killing perfect strangers at the behest of a government that you know you have no control over, join us.” Manela was reprimanded, eventually released, and instructed to distribute his leaflets somewhere other than the Army base: he was not inducted into the military.

Unlike the ‘60s, when the Vietnam War and the draft affected just about everyone in some way, most young Americans now feel simultaneously powerless and uninterested in working for change. Many of them don’t even vote! In every presidential election since 1964, young voters between the ages of 18 through 24 have consistently voted at lower rates than all other age groups, according to the US Census Bureau. Overall, America’s youngest voters have moved towards less engagement over time. Census.org reports that 18- through 24-year-olds’ voting rates dropped from 50.9 percent in 1964 to 38.0 percent in 2012.

It’s been about 50 years since hundreds of thousands of American men were sent to Vietnam and the county’s youth took to the streets to protest what they believed was an unjust war. Looking back, there are important lessons to be learned from ‘60s activists. “Not everyone can be a hero, but everyone can be an activist,” says Roger Manela, who now counsels disenfranchised students at Detroit’s West Side Academy. Here are six suggestions from those who helped change America and end the Vietnam War:

(1) Begin Where You Are. You can bring political and social action into the things you are already expected to do, according to Manela. “Do what you do ordinarily and shift it to adhere to your values,” he says.

(2) Lead the way: others will follow, advises Tom Hayden, a founder of the SDS and principal author of their political manifesto, the “Port Huron Statement.” “In the ‘60s, there was a common reaction to local abuses,” says Hayden, who served in the California Assembly and State Senate, and just published “Listen Yankee: Why Cuba Matters” (Seven Stories Press 2015). “There was an outbreak of sit-ins at lunch counters that escalated from one town to multiple towns to a point where (in about three months) as many as 70,000 people had been arrested,” says Hayden. “It really didn’t have that much organization or money behind it. The traditional organizations got in line and helped along, but it was all young people who basically were acting as if they’d had enough, and were willing to stand up at some risk,” he says.

The civil rights movement’s mobilization extended into the anti-war movement, according to Gamson. who co-directs the Media Research and Action Project at Boston College. “There was an intensity increased by a sense of betrayal that President Lyndon Johnson had misled people, and so there was an anger feeding it,” he says. The general public had a target to focus on—the U.S. government as the “creator of this intervention and a potential major actor in the civil rights movement,” according to Gamson, who believes it’s harder to find a single target today even though a lot of the problems are disturbingly similar.

(5) Prepare for a long struggle and avoid despair. “The most honorable thing you can do is to try to address some of the major problems which threaten the continuation of society in this country and on this planet,” says Tom Mayer, who taught for more than 40 years before retiring from the University of Colorado. Meyer was one of the original organizers of the University of Michigan’s groundbreaking anti-war Teach-in. “You have an obligation to society other than just to lead your private life and enrich yourself,” he says.

(6) Link your insides with your outsides. “There is no greater life than being an activist,” says Harvey Wasserman, a senior advisor to Greenpeace and a life-long activist. The real danger comes when beliefs conflict with action and your soul is at risk. The solution is to integrate who you are and what you do with what you believe.

(Note: This post contains highlights from a longer story I wrote for http://theannmag.com as a  centerpiece in their July issue.)